How to get a border around this polygon?

I have created a shape with 5 corners using polygon as shown below. 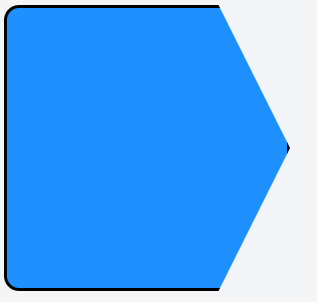 This is the css needed to make it:

Unfortunately I cannot get it to add a black border all around the shape (it is missing on the right side). How would I do that?

I have created a fiddle here.

The border property goes around the outside of an element, and the clip-path property applies a mask to an element. So, as far as other CSS rules are concerned, you're still dealing with a rectangle. Because of this, you can't simply apply a border.

It's not impossible to get very close to the effect you want, however. Using (and abusing) CSS pseudo-elements, borders, and filters you can create the same shape plus an outline with only a single HTML div.

So, what's going on here?

The main div element is just the rectangular portion of the shape (with rounded top-left and bottom-left corners). It also has an ::after pseudo-element which creates the triangle shape. The triangle shape is done using the CSS border-triangle hack.

Okay, so that creates the shape without having to mask off any of the element, but a border still can't be applied directly, since I've already (ab)used the border to create the triangle. Using a CSS outline or box-shadow would be the next logical choice, but both properties go all the way around the element's bounding-box... ignoring features like rounded corners or hacky transparent borders.

Enter the CSS filter property. This provides a family of post-processing filters. The important thing to note is that they treat the element as a transparency mask when being applied, rather than respecting the element's bounding-box... and there is a drop-shadow filter!

Unfortunately, it's not quite as flexible as the box-shadow property in that it doesn't have a "spread" parameter which can be used to create solid shapes that are larger than the element. To get around this, we need to cast a drop-shadow in every direction: up, down, right, and left. That's where this monstrosity comes in:

Expanding on this: this works on any shape you can manage to create (as long as it done without clipping). Just apply a drop-shadow filter to the element, or to a parent/wrapper div (if it's a multi-element shape) to get a border.

How to avoid CSS interference in an HTML page

Presumably you want to wipe out css on only the elements that are "yours". You can do this by applying a style that applies to elements of a particular class...
Read more

How to implement dynamic layout columns by using the `content_for?` method?

You can use adjacent (+) or subsequent (~) sibling selectors to conditionally apply a margin to your content column based on whether or not the left column is visible. For...
Read more

how can i add class to errorsummay without remove header message

The main problem here is the usage of the border-collapse: collapse; style. To solve that you could try one of the following solutions: Solution 1: You could try adding a...
Read more

How to deal with different stylesheets (WYSIWYG Editor and Webpage one) in the same page?

CSS rules can be specific, for example: .page-wrapper .inner will apply rules to a specific subset of this css rule: .page-wrapper So you should specify the div which your WYSIWIG...
Read more

How to make layout with 3 elements where 1 is resizable

Your question asks for help modifying the DOM with javascript/jquery. In your comments, you also mention responsive design but I suggest that you master one thing at a time and...
Read more

How do I conditionally apply CSS styles in AngularJS?

Angular provides a number of built-in directives for manipulating CSS styling conditionally/dynamically: ng-class - use when the set of CSS styles is static/known ahead of time ng-style - use when...
Read more

How Can I Make An Odd Shaped Icon into a “Circle”?

Working jsFiddle: http://jsfiddle.net/gv2wne9o/1/ (applied to one of the two icons) Just setting a border-radius is not going to do it in this case. And you need to set left and...
Read more

How can I find out what CSS is needed to implement twitter Bootstraps Modal. [closed]

I suggest using the Chrome browser, right click the modal and 'inspect it'. From there on the bottom in the right hand column you'll see all the CSS that makes...
Read more

how to set border spacing in javafx

How to replace non-existing images with a default one in css?

How to build those rectangular with picture and text css bootsrap? [closed]

Isotope might do the job for you. Or you can simply use Bootstrap grids.
Read more

How to keep css elements from moving during transition

How to add Jquery Mobile effects to dynamically added elements?

You need to use jQuery live function for bind new action for newly added element $('a').live('click',function(){ //do something }) and you can refresh the list like this to get the...
Read more

How to change background color of elements every 5s using jquery? [duplicate]

You should use setInterval() to repeat your code for seconds. Because you added background of element in style attribute, you can use HTMLElement.style to get name backgroud color. setInterval(function(){ $("div").each(function(){...
Read more

How to get smaller divs to stack to the right of larger divs?

There's really nothing wrong with wrapping elements in a div in order to achieve a certain layout. In fact, a div is a generic container which is meant to group...
Read more

How to add a centered div that fades-in from the top over my content?

How to line up items of varied length in a resizable space in CSS?

How to give the background-image path in CSS?

How to modify HTML inside PHP by CSS [closed]

How to get an HTML div to dynamically expand in a horizontal direction to fit window width?

The actual answer is partially explained in this article, titled: "Using CSS "Display: table-cell" for columns". However, it does not cover the full answer, either. The code, below, includes the...
Read more

You can use a pure CSS solution using CSS property content. If you are interested to know more about content you can read this useful article. .txt span{ display:none; }...
Read more

CSS: How would I select a specific Text and hide it

Check this topic, it's the same thing. Conclusion is, you can't select the text node with the css at this moment(without wraping it in a html element), but you can...
Read more

How Do I Make a “Trickless”, Cross-Platform CSS-Based Same Column Height?

This approach is relatively "trickless" -- and it's the only approach I've found that works correctly, and doesn't involve any big-time hacks. (also, no tables - only divs and css)....
Read more

How to color row on specific value in angular-ui-grid?

How to call JavaScript on change of CSS

There isn't a specific event for media query changes, as far as I know. You can bind to the window's resize event and re-run your javascript on every resize, or...
Read more

How do I set the background-image property to a linear gradient using jQuery's css method?

How to display 3 buttons on the same line in css

How to I change this css psuedo button in Javascript/Jquery

how to prevent datepicker css from changing

How to disable Cufon on certain elements?

How to invoke a “tooltip” when hovering over ID'd HTML elements in a Browser?

asp .net: how to change css on span tag in c#

How do I scroll d3 elements while keeping a portion of the svg in a fixed position?

How to change css property using jquery with this code

CSS: how to layout 3 columns, 2 are optional

WordPress: How to style Title and Excerpt in Display Post Shortcode Plugin

CSS: How can I right-justify text against centered text?

how to select all list items except for the first and last using CSS only?

How to add / remove html elements and content based on the browsing device?

How to add css to dynamically created tables

How to get rid of white space between css horizontal list items? [duplicate]

How to solve this HTML/CSS bug? [closed]

How to apply CSS class to a split string

how to apply css to a link within a particular div only?

How to display parent form when input text is on focus?

How to get all CSS of element

How to make top and bottom of div triangle with CSS?

How to create and apply CSS to javascript Alert

How to change a button data-icon size

CSS: How to theme only submit button (and not cancel or back button) - I´m using Drupal 6

How to apply color to all element between the first and the last without giving a number to nth-child()?

How to put the table inside the box